Have you ever felt there is an idea waiting to burst out of you through words, but you can’t quite decipher it? Do you yearn to make sense of the chaos brewing in your mind? Do you have a story to tell but are waiting for the right words?

Come, write with us, as we embark on a journey to transcend from the mundane. Seek inspiration from ancient writing practices and supplement them with contemporary sensibilities. Alekhya is where you will evolve your ideas from abstract to tangible.

A writing retreat flowing out of Parvati Valley in the Himalayas, Alekhya was borne out of love for the craft of writing. Our aim is to provide a holistic environment which lets you be, so that you can devote yourself towards a singular objective – Writing.

We believe in keeping things fuss-free, hence, an uncomplicated application process. Just fill out a few details and let us know what compels you to write. Apart from that, we require a writing sample.

Our next retreat is scheduled from October 3-8, 2021. All COVID19 appropriate protocols will be followed. The participants will have to be fully vaccinated, and carry negative RT-PCR test reports with them. For more details, please email us at alekhyawritingretreat@gmail.com or fill out this form.

The cost to attend is INR 40000. This includes accommodation, food, logistics and travel costs from and back to Delhi. For this retreat, we are looking for 4-5 writers to join us.

The retreat is experiential, and designed to satiate your creative urges. Imagine living with a bunch of writers, in a secluded apple orchard, attending bespoke workshops and getting mentored by the best! You will have a dedicated space to write. You can also explore the valley with forest walks and treks.

You will essentially have the freedom to choose how you spend your time, unbound by schedules or timelines. You will also have the choice to extend your stay for a few days and continue writing.

For any queries, feel free to reach out to us!

Our prolific mentors include acclaimed writers and editors who will guide you as you work on your craft. In October 2021, we will be joined by Elizabeth Kuruvilla and Manan Kapoor.

Elizabeth Kuruvilla is Executive Editor at Penguin Random House. She commissions literary non-fiction and fiction for the publishing house. For two decades before she joined the publishing industry, she worked as a journalist with well-known national newspapers and magazines, such as The Indian Express, Hindustan Times, Mint, The Hindu and Open magazine. She was briefly also Editor, Blouin ArtInfo, an international art newspaper headquartered in New York.

Manan Kapoor is the author of A Map of Longings: The Life and Works of Agha Shahid Ali (Yale University Press, 2022, Vintage, Penguin Random House India, 2021). His debut novel The Lamentations of a Sombre Sky was shortlisted for Sahitya Akademi’s Yuva Puruskar 2017. In 2019, he was a writer-in-residence at Sangam House Writers’ Residency. His writings have appeared in The Caravan Magazine, Boston Review, The Hindu, Scroll, The Wire, and Firstpost among others. He currently lives in Manali.

Previously, we have worked with:

Janice Pariat is the author of Boats on Land: A Collection of Short Stories, Seahorse: A Novel andThe Nine Chambered-Heart: A Novella. She was awarded the Young Writer Award from the Sahitya Akademi and the Crossword Book Award for Fiction in 2013. She studied English Literature at St Stephen’s College, Delhi, and History of Art at the School of Oriental and African Studies, London. Her work—including art reviews, book reviews, fiction and poetry—has featured in a wide selection of national magazines and newspapers.  In 2014, she was the Charles Wallace Creative Writing Fellow at the University of Kent, UK. Currently, she lives in New Delhi with a cat of many names.

Rahul Soni is a writer, editor and translator based in India. He is Senior Commissioning Editor (Literary) at HarperCollins Publishers India. He was previously Editorial Head at Writer’s Side, a literary agency and manuscript assessment service, Associate Editor at Almost Island, a journal for literature that “threatens, confronts, or bypasses the marketplace”, and Season Coordinator at the Sangam House international writers’ residency program. He founded and, from 2008 to 2012, edited Pratilipi, a literary journal, and Pratilipi Books, an independent publishing imprint, and from 2013 to 2015 was Editor-at-Large (India) at Asymptote, an international journal of literature in translation. He was a Charles Wallace Visiting Fellow in Literary Translation at the University of East Anglia in 2010 and received the Sangam House Fellowship in 2012. His work has appeared or is forthcoming in Almost Island, Asymptote, Biblio, La Hoja de Arena, Poetry at Sangam, Poetry International Web, Pratilipi, Recours au Poème, Tehelka, The Four Quarters Magazine, The Indian Quarterly and other venues. He edited the anthology of Hindi Poetry in English translation, Home from a Distance (Pratilipi Books, 2011), and translated Shrikant Verma’s collection of poetry, Magadh (Almost Island Books, 2013), Geetanjali Shree’s novel The Roof Beneath Their Feet (HarperCollins, 2013), and a selection of Ashok Vajpeyi’s poetry A Name for Every Leaf (HarperCollins, 2016).

Gurveen Chadha is Commissioning Editor at Penguin Random House India. She started her career at Random House India in 2011. Over the years she has published a range of bestsellers across different segments—from fiction and self-help to fitness and parenting. Her list of current and forthcoming authors include Soha Ali Khan (The Perils of being Moderately Famous), Milind Soman, Manisha Koirala, Neeraj Kumar (Dial D for Don), Nidhi Dugar Kundalia (The Lost Generation) , Vasudha Rai (Glow), Vikrant Khanna (The Girl who Knew Too Much), Yasmin Karachiwala (Strength and Train: the Pilates Way), Richa Chadha and Shenaz Treasurywala. When she’s not reading or editing, she can be found trekking the Himalayas or running races.

Priya-Alika Elias is a lawyer and writer currently based in New Delhi. She has just published her first novel with Penguin Random House, titled Besharam. She has been writing for American magazines such as The New Republic, Vox, Vice, The Outline and Racked for years – and has written everything from advice columns to fiction and poetry.

Meenakshi Reddy Madhavan is a Writer and Columnist based out of Delhi. Formerly a journalist, Madhavan’s first book You Are Here was commissioned in 2007 on the basis of her blog Compulsive Confessions. Since then, she has written three more novels, a collection of short stories, and contributed to several anthologies. She also writes essays and columns for a variety of publications. The One Who Swam With The Fishes is her sixth book and her first foray into mythology-inspired writing, published by Harper Collins.

Akshay Gajria is the director of Tall Tales, one of India’s biggest story-telling platforms. As a part of Tall Tales, he regularly hosts workshops and live-shows where the focus is on story-telling and how to extract plots and characters from everyday life. He has also been writing for the past seven years, and some of his work has been published in various online magazines. He has been a co-contributor of the book Hack into your Creativity – Story Prompts for every type of Writer, published by Penguin. He has also copy-edited The Best of Tall Tales, published by Rupa Publications. 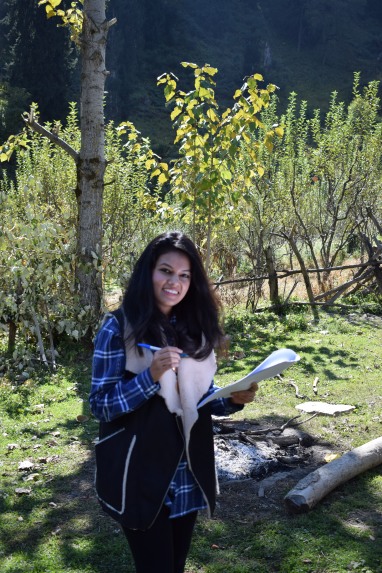 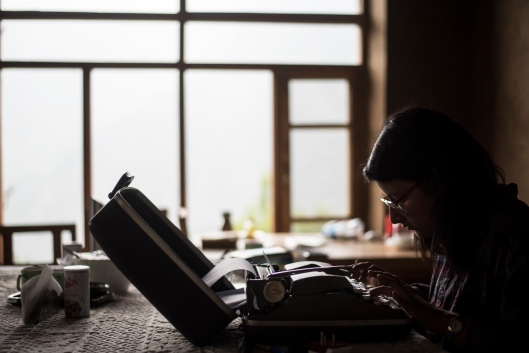 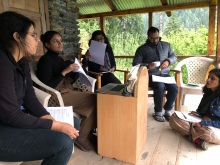 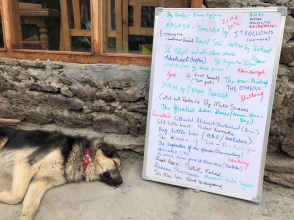 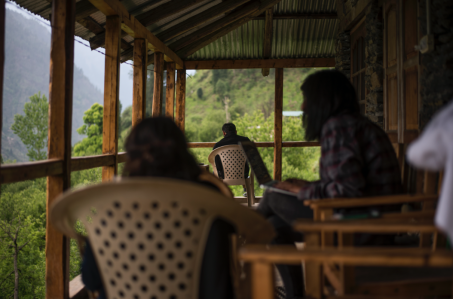 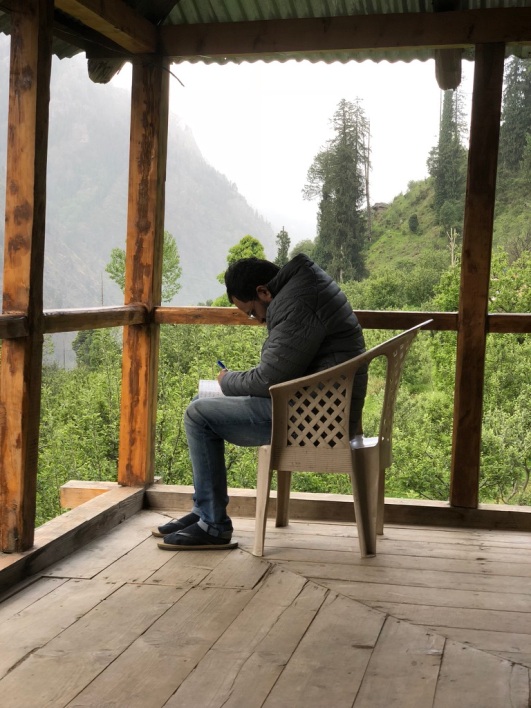 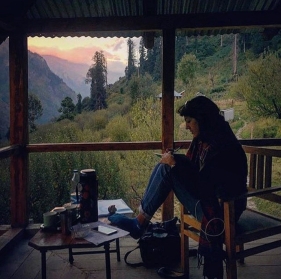 Alekhya is a venture of Shilla Treks, an experiential travel service based out of the Parvati Valley. We work from an apple orchard in the middle of nowhere.

The venue is near Kasol, about 50 km from the Kullu Airport and located 8000 ft above sea level. It has cottages and dorms that offer panoramic views of snow-clad Himalayas. It offers the perfect balance of seclusion from the real world, and enough human contact to make you feel at home. We function with the support of locals, tribals and nomads who live in and around that area, practising eco-tourism

Mahima Sood, a Data Scientist with deep interest in AI ethics. She has previously worked as a programmer and content manager for various digital platforms, before curating a travel startup in the Himalayas. She is also the managing editor of Subaltern Word.

Shalvi Shah, a writer and editor based in the United States and India. She has completed MFA at Columbia University’s School of the Arts in Creative Writing (Fiction) and received her bachelors degree in the same from Emory University. She is also the editor-in-chief of Subaltern Word.

We’d love to hear from you. For any queries or feedback, please write in and we’ll get back!